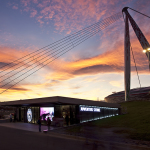 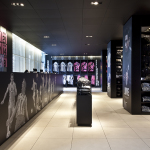 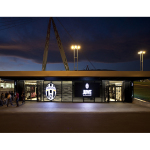 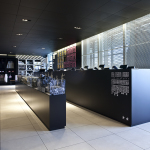 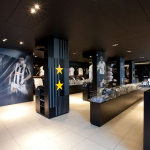 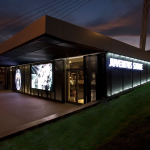 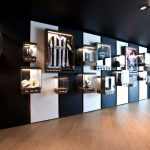 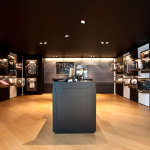 FutureBrand and Maat Architecture have designed and implemented two separate projects, retail branding for the new Juventus stadium, which opened on September 8. These are two of Gameday store and the VIP store, each dedicated to different target and each with its own specific purpose.
The two Gameday store were designed as a contemporary version of the temple in which to celebrate the rites and liturgies pre and post game. The stores open, in fact, two hours before kickoff and closes one hour after the end of the match, access is restricted to fans with tickets. Designed by wrapping the architectural space with a special expanded metal, inspired by the story of football nets, the shops also make use of the outdoor spaces thanks to the presence of a giant screen that shows live images and clips most significant historical involvement in a continuous and direct with “La Vecchia Signora”. Inside the shop the fans will enjoy the collection “Replica” with the opportunity to customize the jerseys of Juventus heroes proposals from Nike; along with all the accessories of the practice of “worship”, from scarves, to hats, to the flags.